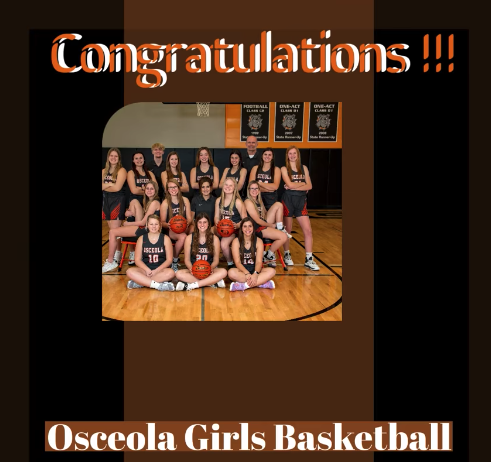 We want to congratulate our Girls Basketball Team on qualifying for Sub-State.  The girls were able to defeat Giltner and Hampton to win the D2-3 Subdistrict Tournament improving their season record to 14-9.  The girls will play #1 ranked Falls City Sacred Heart at Palmyra at 6:30pm on Friday, February 25th with the opportunity to qualify for the State Tournament in Lincoln starting March 7th.

This group of girls have accomplished a lot in their pursuit to leave a mark on the Osceola Girls Basketball Program.  They were able to beat Exeter-Milligan, take a top 3 seed into the Crossroads Conference Tournament, earn a top seed in the Subdistrict tournament, and begin to change the culture of the entire program.  With 14 wins, the girls have reached their second highest total of wins in the past 20 years, only eclipsed by the 2015-2016 basketball team which had 15.  Thank you to the Seniors Trinity Boden, Baili Kumpf, and Sadie Sunday.